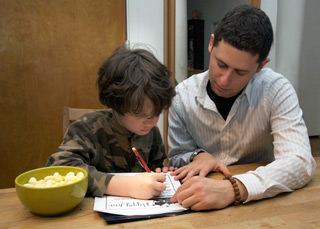 Language is the foundation for speaking, listening, reading, and writing.

Our analysis will target where your child is having difficulty with his or her speech and language development. Pinpointing the underlying difficulties is critical for effective treatment. In addition to Language Processing Expressive & Receptive Therapy, we provide speech therapy for all ages.

School-age students with oral language problems typically omit information when they speak, e.g. word or phrase, have difficulty retrieving words or ideas, convey a general message (have a hard time being specific), have a less diverse vocabulary (including verbs), speak shorter utterances, use less complex sentences, make more grammatical errors, take more time to speak, pause a lot, repeat words or phrases (e.g. “but he but he,” etc.), frequently revise what they say (“and so, um, they he and so but they couldn’t give him a name”).

Another aspect of communication we give focus on is acquiring narrative skills. Narrative development is crucial as children expand their communication skills, such as expressing and describing stories, experiences, and previous events that go beyond the present context. It is also directly correlated with a child’s success in school and academic achievement.

Young children typically acquire all grammatical morphemes by age four (see chart below). But for children struggling with narrative skills or showing other signs of an expressive language disorder, parents may notice obvious delays or missing aspects in their language skills. At Queens Letters, we work with children who have narrative development difficulties.

According to research, narrative development can play a significant role in determining a child’s later success in school and literacy. This is because narration and relaying a previous experience allows the child to communicate and use language beyond the present context or the “here and now.” This determines the child’s grasp of linguistic structure and words chosen. But what exactly is narrative development? And how do you know your child’s progress is appropriate for his or her age?
A child’s narrative skills refer to his or her ability to use language in telling or communicating a story. As children develop their narrative skills, they learn to follow the rules of story-telling. This involves sequencing of events, organization, introducing characters, establishing the plot or main idea, and taking perspectives.
Narrative skills are first developed and introduced in very young children through storytelling or bedtime story sessions with their parents. By listening to stories and being exposed to story-telling, children begin to understand and develop narrative structure. In most cases, children with language impairments or conditions struggle with comprehending and executing narratives.
Find out more about the Stages of Narrative Development. 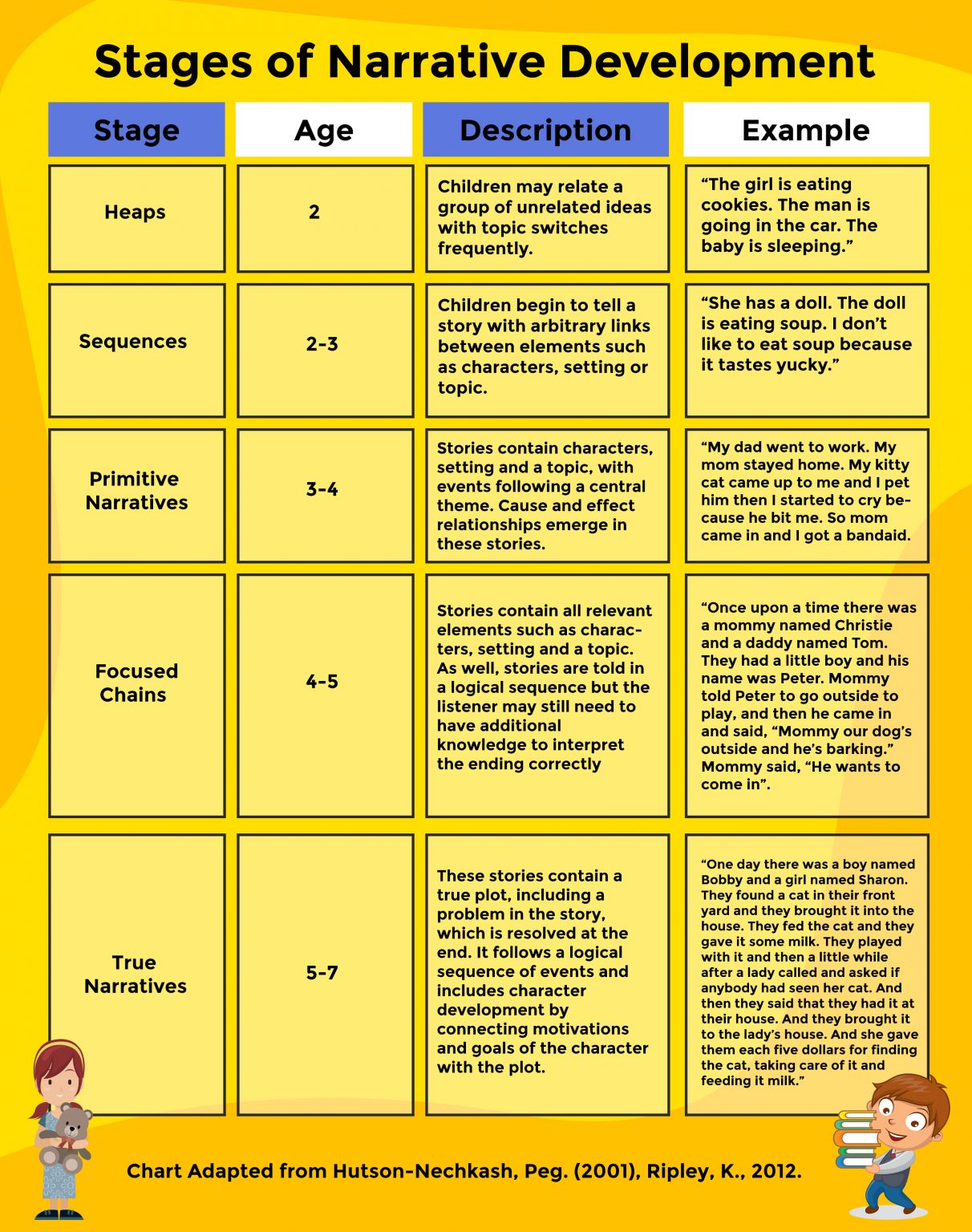 Problems with narrative development are a tell-tale sign of an expressive language disorder. Unlike speech sound disorders, which involve difficulties in producing spoken sounds, language disorders refer to problems using spoken language compared to peers. These expressive problems manifest in at least one of these areas: spoken vocabulary, the complexity of what the child is saying (grammar), and social use of words (pragmatics). These issues become more apparent when children, older than 4 years of age, have difficulties telling stories and making friends.

Mixed Receptive-Expressive Language Disorder – Difficulty with comprehension or understanding the words or complexity of what the individual understands compared to peers and has an expressive language disorder.

Expressive Language Disorder – Receptively, the individual is age-appropriate but there are significant issues expressing oneself compared to peers.

Spoken or expressive language disorder is a lifelong condition and appears in early childhood. It is often developmental in nature but may also be caused by traumatic brain injury. An individual with expressive language disorder exhibits normal comprehension skills but has difficulty with written and/or verbal expression. This can impair academic achievement and make it more difficult to socialize in groups with peers.

Signs of an Expressive Language Disorder

Depending on the age, linguistic development, and affected language domains, the signs of an expressive language disorder can vary among individuals. In children, these symptoms can manifest in a variety of ways and affect the following language domains:

Phonology – The ability to recognize and work with sounds in spoken language, e.g. rhyming or playing around with sounds.

Syntax – Another word for grammar.

Morphology – A specific type of grammar dealing with units of words called morphemes.

As with all speech or language disorders, it is always important to first ensure that there are no hearing issues affecting language development. A hearing assessment by an audiologist is necessary to rule out any issues with hearing (ears). Even undetected ear infections can interfere with acquiring language in younger children.

To get your child diagnosed with an expressive language disorder, a speech-language pathologist (SLP) must do a thorough evaluation. A comprehensive assessment must be conducted with the help of the child’s family and teachers. This evaluation process includes both informal and formal assessments. Formal evaluation comes in the form of standardized tests, while informal evaluation involves interviews, observations, checklists, and language samples.

While both types are essential in providing accurate diagnosis and appropriate treatment goals, it is the language sample that provides a clearer picture of the child’s language abilities and conversational skills. Through language sampling, an SLP is able to gain a better understanding of the child’s strengths and weaknesses with regard to the key language areas or domains mentioned above.
Our SLPs at Queens Letters conduct language sampling in order to accurately diagnose and assess the needs of your child using the Systematic Analysis of Language Transcripts or SALT program. The typical expressive language development in young children, aged 12 months to 47 months onwards, is outlined in the Acquisition of Sentence Forms Within Brown’s Stages of Development. This framework is an invaluable tool used by SLPs in conducting a structural analysis of a language sample.
(Related: Find out more about language sampling in this article on the Structural Analysis of a Language Sample.)

During this phase, speech-language pathologists will need to know the child:

How to Treat Expressive Language Disorder

Once a diagnosis is made, the SLP will conduct further analysis and observations before creating an individualized program. However, it is important to remember that therapy will not offer a permanent “cure” for the disorder. Instead, SLPs can equip children with strategies and techniques to help them manage their condition.

Therapy methods can vary, depending on the therapist and the child’s needs. The modeling target behavior is one technique where the therapist models and reinforces aspects of speech that need to be targeted, such as sounds, vocabulary, and grammatical structure.

Some areas that SLPs address are:

For elementary school children (ages 5 to 10)

We are ready to help you right now!